Lovely to be back leading the New Adventures Orchestra for Matthew Bourne’s CarMan show at the Royal Albert Hall in June. Could not resist a picture opportunity on stage with the cars! 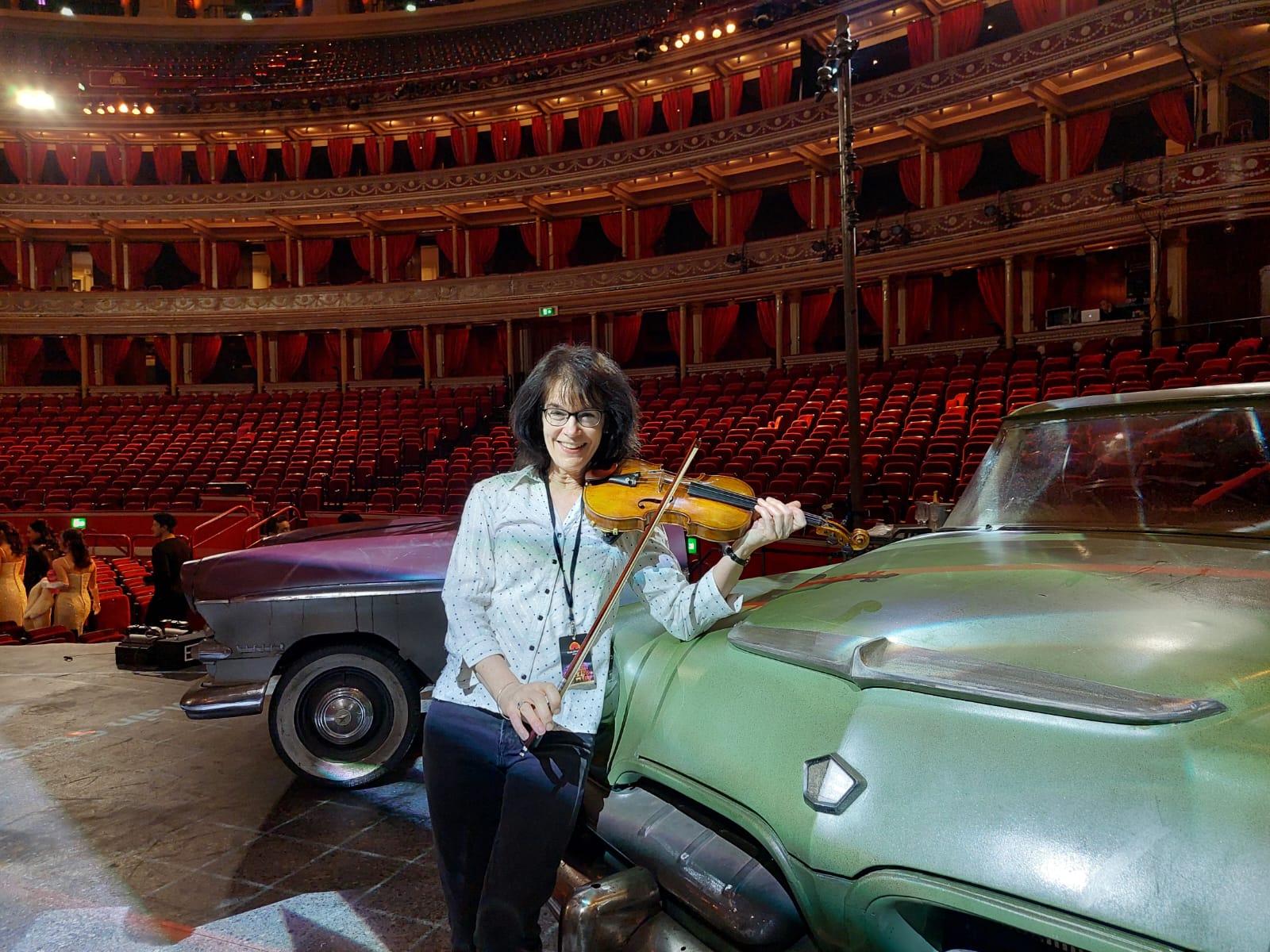 Gina has sadly decided to step down as first violinist of the Brodsky Quartet, due to family commitments. She thanks her wonderful colleagues for so many fantastic musical and culinary memories! (February 2021) 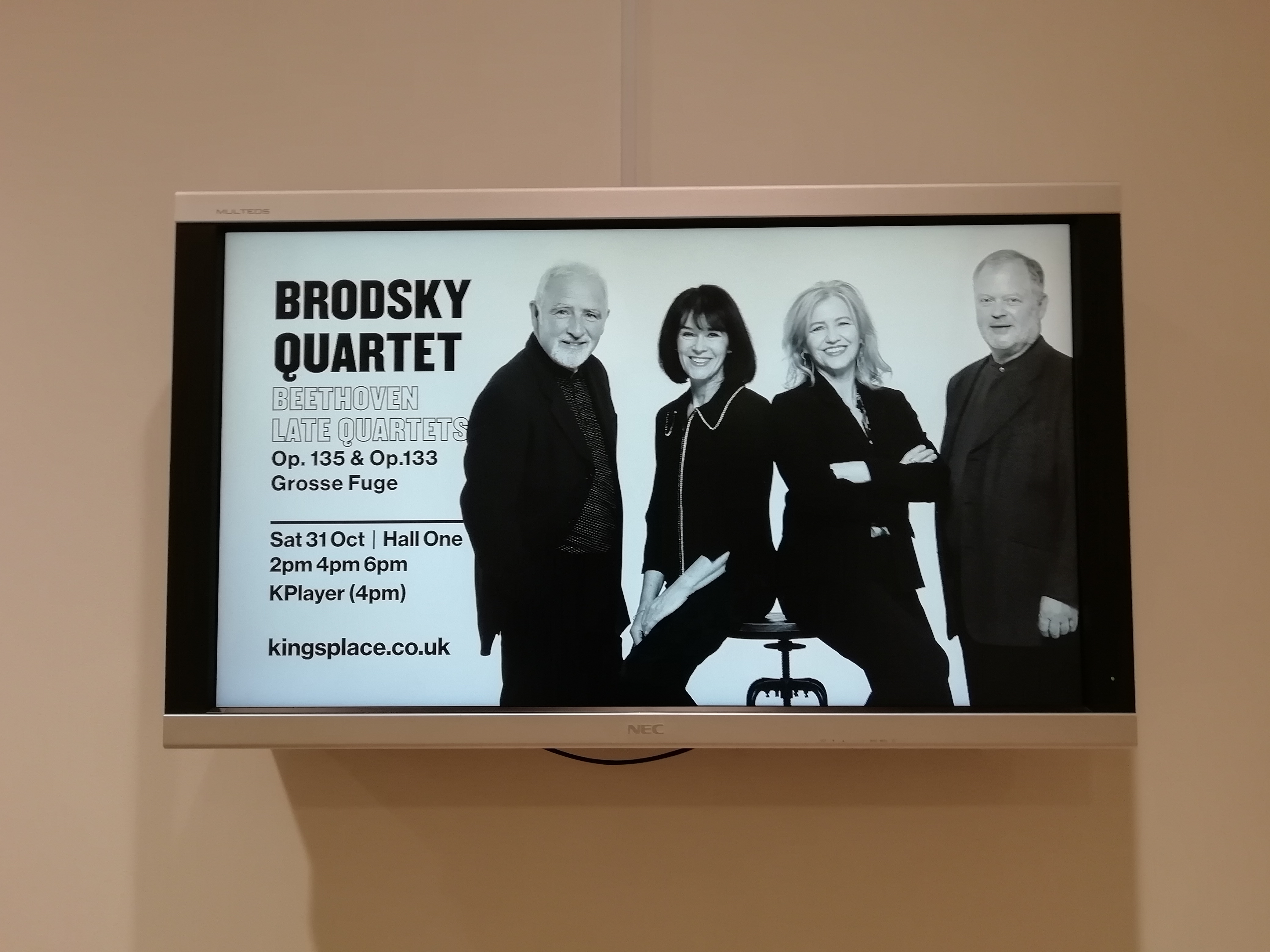 Patron of Music in Peebles

Gina is honoured to have been invited to become Patron of Music in Peebles. She intends her role to be more than just a letterhead appointment, hoping to promote young musicians at the start of their careers and develop more opportunities for young people in the Scottish Borders to experience classical music.

Find out more at www.musicinpeebles.org.uk

Gina McCormack is well established as one of Britain’s leading artists, with regular performances as a soloist and chamber musician at venues across the country and abroad. She made her recital debut in London at the Wigmore Hall at the age of 21 and has appeared many times since then in both that Hall and at the South Bank Centre, and at venues and Festivals across the country. Gina has performed as soloist with the Hallé and Royal Philharmonic Orchestras, the Scottish Chamber Orchestra and the former Bournemouth Sinfonietta. Solo tours abroad have taken her to France, Norway, Denmark, the Czech Republic, South Africa and South America, and most recently to Austria and Switzerland.

Gina studied with György Pauk at the Guildhall School of Music and Drama, London, and attended masterclasses with Sandor Vegh (at the Salzburg Mozarteum and at Prussia Cove in Cornwall), Dorothy DeLay, Andras Mihaly and Siegmund Nissel (from the Amadeus Quartet). While still a student, she was a prizewinner at the Royal Overseas League Music Competition in London and at the International Young Concert Artists’ Competition in Tunbridge Wells, where she has since returned to serve on the jury.

Gina has over twenty years’ experience as a quartet leader. For many years she was the leader of the Sorrel Quartet, with whom she was frequently heard on BBC Radio Three. The quartet made twelve CDs for Chandos Records, of works by Britten, Mendelssohn, Schubert and the complete cycle of Shostakovich quartets. Their Elgar CD was chosen as one of Classic FM’s records of the year and was Editor’s Choice in Gramophone Magazine. The group also recorded John Pickard’s Quartets on the Dutton label.

She then led the Maggini Quartet for two years, leaving that group in March 2010 to focus on her solo work, continuing a long association with her duo partner, pianist Nigel Clayton. Most recently, she spent two years as first violinist of the Brodsky Quartet, with a hugely busy concert schedule in the UK and abroad. Highlights were tours of Australia, New Zealand and Mexico. She made the tough decision to leave the group in February 2021, needing to be closer to home for family reasons, and will be returning once again to her solo work.

Gina McCormack is also well-known as a teacher, having spent 11 years as professor of Violin at Trinity Laban Conservatoire of Music and Dance (formerly Trinity College of Music) in London, followed by 7 years at the Royal Conservatoire of Scotland in Glasgow.  She is currently teaching at the Royal Northern College of Music, Manchester, and also gives regular masterclasses both in the UK and at summer festivals abroad. She frequently coaches amateur musicians, finding their deep love and knowledge of music rejuvenating.

Gina’s passion for dance has led to a long association with the choreographer Matthew Bourne, whose New Adventures orchestra she has led for many years, being part of his very first iconic production of “Swan Lake” and so many other award-winning shows since then. She has also continued her long association with the London Chamber Orchestra throughout her busy career, a special highlight of which was playing for the wedding of the Duke and Duchess of Cambridge.